Home » Seminar on ‘Remember and Recognize: The Case of Bangladesh Genocide of 1971’ held in Canada 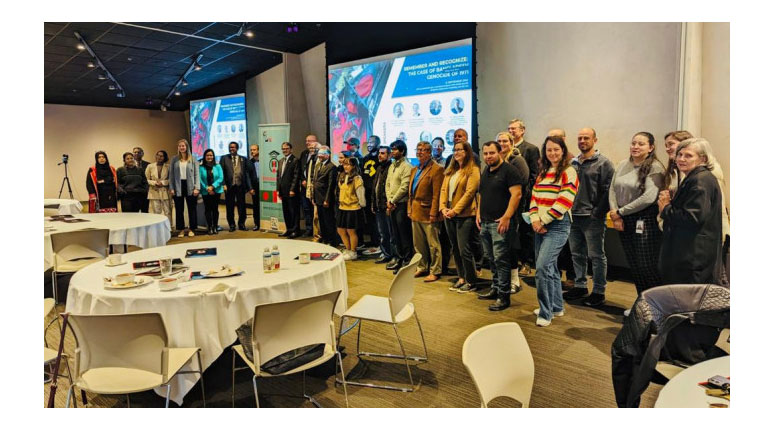 Ottawa, 21 September : The High Commission for Bangladesh in Canada and the Bangabandhu Centre for Bangladesh Studies (BCBS) in Canada, Liberation War Museum, Bangladesh, Genocide Studies Centre, University of Dhaka, Refugees Resilience Centre and Rotary Club Canada yesterday jointly organized a day-long seminar on remembering and recognition of the case of Bangladesh Genocide on 1971 at the Human Rights  Museum, Winipeg, Canada.

The seminar was held in a hybrid format where the virtual discussion session was held where Foreign Minister Dr. AK Abdul Momen spoke through a video massage as the Cheif Guest and Foreign Secretary Ambassador Masud Bin Momen spoke from New York virtually as a Special Guest. High Commissioner of Bangladesh to Canada and the Chief Patron of the BCBS in Canada Dr. Khalilur Rahman and Dr. Kawser Ahmed, Cheif Coordinator of the BCBS, Canada, gave introductory remarks.

Foreign Minister Dr. Momen said that the Genocide of Bangladesh committed in 1971 by the Pakistani military is one of the most heinous crimes in human history. We do not know of another instance of such barbarism of such intensity and mayhem. He regretted that the Bangladesh genocide is yet to be recognised by the international community to the extent the genocide warrants. He added that on 25 March 1971 the Pakistan junta undertook the cruel and enormous mayhem of innocent civilian people of Bangladesh in order to suppress the nation’s democratic aspirations by sheer force of fear and terror. He informed that Bangladesh declared 25 March as the Genocide Day and Bangladesh is working for getting the date recognized as the International Genocide Day by all the countries in the world.

Foreign Secretary Ambassador Masud Bin Momenn said that 1971 has been the most significant year in the history of Bangladesh. In one hand, Bangladesh achieved her independence in this very year. On the other hand, the nation experienced the ugliest chapter of brutality, atrocities, indiscriminate killing, raping, looting, and arson to achieve independence. And the world witnessed another genocide within three decades of the Second World War.

At the seminar, among others, several videos/documentaries were screened. Among them the documentary Stop Genocide made by the illustrious filmaker Jahir Raihan, who himself became a martyr, was screened. The Liberation War Museum also presented a poster on the Bangladesh-Canada efforts on recognition of the Bangladesh Genocide.

It may be mentioned that it was the first ever international seminar on Genocide that took place outside Bangladesh with participation of so many organizations and experts from all over the world.