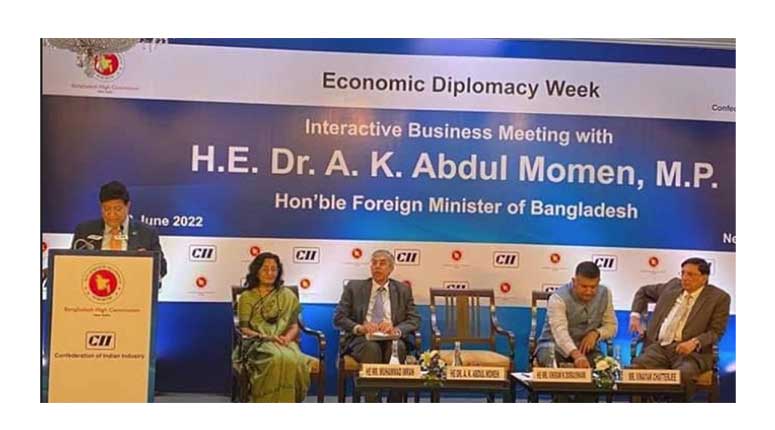 New Delhi, 19 June: Foreign Minister Dr. A K Abdul Momen stated that the government of Bangladesh based on development aspirations especially emphasizes economic diplomacy in order to achieve the Father of the Nation Bangabandhu Sheikh Muzibur Rahman’s dream of ‘Shonar Bangla’. He made the remarks yesterday while delivering his keynote address in a seminar entitled “Economic Diplomacy” in New Delhi, arranged by Bangladesh High Commission in New Delhi in collaboration with the Confederation of Indian Industry (CII). The High Commissioners of both Bangladesh and India and President, CII also spoke at the seminar.

Dr. Momen stressed economic diplomacy as the most significant element of diplomacy in the face of ongoing global economic unrest and recent political developments in Europe. He stated that Bangladesh, once known to be a basket case, after 50 years of its independence, down the line, under the able leadership of the Hon’ble Prime Minister Sheikh Hasina, defying all odds, is currently the 41st largest economy in the world set to be the 25th largest by 2035.

He noted that Bangladesh once known for femine, food and aid dependency is now not only self-sufficient in food production but also one of the largest producers of rice, grains, vegetables, some fruits and freshwater fish. He said Bangladesh has proven its capacity to undertake mega projects like Padma Multipurpose Bridge, the country’s longest bridge by its own fund which has been completed and is scheduled to be inaugurated by the Hon’ble Prime Minister on 25 June 2022.

Dr. Momen expressed satisfaction as Bangladesh and India have made remarkable progress in bilateral cooperation during the last decade and emphasized on complementing each other’s necessities and priorities for the overall development of the people of both the countries.

He noted that bilateral trade has been growing steadily over the years and crossed the landmark of 16 billion USD last year despite the challenges posed by the pandemic. He also said the proposed CEPA will usher in a win-win situation in terms of possible gains in the realms of trade and commerce.

He urged the Indian businessmen to invest in the 2 specialized economic zones of Bangladesh namely Mongla and Mirsharai dedicated to Indian investors. He emphasized that the businessmen and the private investors of the two countries should look beyond the border and work as partners toward building a prosperous and economically vibrant region.

Dr. Momen arrived at New Delhi yesterday in the afternoon to attend the 7th JCC meeting, co-chaired by the two Foreign Ministers of Bangladesh and India scheduled to be held on 19 June 2022.